Research shows that one of the reasons we have a hard time planning and saving for the future is that we lack a connection to our future selves. We can’t – or won’t – picture ourselves as older. Our youth-obsessed culture draws the picture of an elder you as wrinkled, frail and infirm, rather than strong, experienced and powerful. Women in particular struggle with this and are continually fed statistics about how they’ll live the last years of their lives unneeded, unwanted and alone.

Who wants to plan for that kind of future? Can’t there be an alternate future of experience, community and engagement?

A Picture of Your Future Self
One of the best solutions to connecting Current You to Future You involves digitally aging your own portrait. A few years back, a major bank released an app that takes a current photo of you and digitally ages it. The tool was based on a series of experiments a research team at Stanford conducted, which found that people who view age-progressed photos of themselves often consider allocating more money to retirement accounts.

Published in the Journal of Marketing Research, this research brought together a heavyweight team as disparate as Bill Sharpe (Economist, inventor of the CAP-M asset pricing model, and winner of the Nobel Prize) and Laura Cartensen (Professor in Public Policy and professor of Psychology at Stanford, founding director of the Stanford Center on Longevity, and the principal investigator for the Stanford Life-span Development Laboratory).

In one of their studies, 50 people were shown either an age-progressed picture of themselves or a current one, and then asked to allocate $1,000 among four choices: a checking account, a fun and extravagant event, a retirement account, or buying a gift for someone special. Those who viewed the photo of their future self allocated more than twice the amount to the retirement account than those who viewed a current photo.

There are loads of blog series on advice to your younger self. What if we had known certain things earlier? What if we had done things differently? The gift of planning for Future You is that there is still time. You ARE the younger you. How can we connect who you are now with Future You?

What The Terminator Can Show You About Your Future
By now you all know I love movies. In part I love the way we use them to express human experiences and offer opportunities for empathy, as well as to entertain. In the Terminator film series (Terminator, Terminator 2 (T2) and Terminator Dark Fate (DF), skipping over the forgettable 3rd-4th-5th films in the series) we see the past, present and future visit and revisit each other, trying to alternately teach and learn the lessons to ensure human survival. 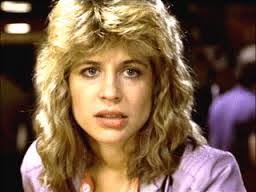 In the original film, protagonist Sarah Connor (Linda Hamilton) meets the cyborg “Terminator” when she is a college student waiting tables in Los Angeles. She is shown two futures. If she does nothing, she sees the grim fate she and her fellow humans share in a war against the machines. By the end of the film, she evolves from a damsel-in-distress to a damn-it-I-have-to-save-myself heroine, resolved to chart a different path than the harsh future she has seen.

Fast forward 10 years to T2, when we meet Sarah again, at 30. She is a mother now, and has grown into a warrior, having spent the last decade developing her skills and training to protect her son and his future. (She has also developed an enviable set of arms, and if like me, you can barely hang from a pull-up bar much less do a pull-up, you are probably covetous of them, too.) Choosing the future she wanted, and the Future Sarah she needed to be, she worked to prepare for it. She became something she couldn’t have envisioned as a college coed – until she saw herself in the future. 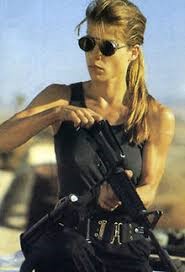 T2 shows Sarah fixated about the future, plotting and planning obsessively (which is not what I’d recommend for you). She couldn’t stay the rosy-cheeked college girl; she had to envision her future self as capable, strong, tough. She needed to start planning today for that version of herself, and may have lost part of herself in the process, at least for a time. But her future – and that of others – is at stake.

Your future is at stake, too. You don’t need to have nightmares about nuclear annihilation or be chased by cyborgs to appreciate that you need to plan for the future you want.  By acting today, you are rewarded not only with the future benefits of that action, but with a better life now.  Those actions aren’t depriving Current You as much as they are protecting and preparing Future You for who and what you want to be.  That’s peace of mind.

Envisioning Future You
We know that getting to know Future You — embracing her, admiring her, working to protect her — can incent you to act now.

Author and fellow Yale woman, Tara Mohr, wrote Playing Big: Practical Wisdom for Women Who Want to Speak Up, Create, and Lead to encourage women to live bigger lives, taking chances and going for what they really want. She devotes a chapter to summoning your “inner mentor,” that older, wiser, more knowing person we become over time. It’s not a question of looking back, but of looking into the future. The guided visualization she outlines to connect with your Inner Mentor involves conjuring the Future You:

Close your eyes and picture yourself many years in the future. This is you after a lifetime of experience. Imagine Future You in all your glory: what you are wearing, where you are living, what you are doing.  Take your time and take in every detail. Then think of a thread, a stream of light, a band of color flowing back to you, today. What did Future You do, what did she experience, to get from where you are now, to where you are in that future? How did you become that person? What does Current You need to do to manifest this future?

Your inner mentor is Future You. She is knowing and caring and full of a life well-lived. Taking the time to fully imagine what we want our future self to be – and to see in our mind’s eyes the vivid, enjoyable, rich life that self can have — helps connect us with the steps we need to take to make it happen.

A part of this exercise involves offering your future self love and kindness. It’s true that picturing Future You comes with giving up part of who you are now, maybe trading that smooth skin for a few wrinkles, a dark mop of hair for a paler (and possibly sparser) coif. You aren’t going to be the same in your future. But that doesn’t mean you haven’t exchanged some of what you feel you lose with what you might want to have: honed talent, cultivated career, curated hobbies, a ride-or-die circle of friends. A rich history, and ideally, a financially free life. Look at Future You with an admiring eye.

An Older, Experienced, Badass You 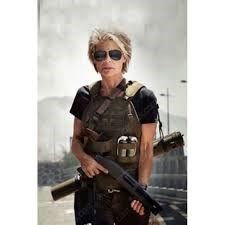 By the time we meet Sarah Connor again, in Dark Fate, 30 years have passed and she’s now 60-something. Take a look at this Sarah, Future Sarah: Her plans have achieved some success; other things have not gone well. That happens to us all. But we’re still here, and she’s a badass. While the flak jacket-wearing warrior image might not be your vision of yourself as an older person, I’d sign up for a Future Me that is as fit and fierce and purposeful as DF’s Sarah Connor.

That’s all well and good, but you know what I’m going to say next. Future Me takes shape based on what I do between Now and Then.

I know I’ve got to start hitting the gym to get those arms.  I also need to see myself in the future as a woman I care about, someone I value, for whom I would make sacrifices today in exchange for moving closer to becoming Future Me. She might have a few more wrinkles, but she’ll beat you arm wrestling. I’m not afraid of the picture of Future Me; I want that future, and I know I need to act today in order to become her tomorrow.

The future doesn’t have to be a frightening one full of circumstances we just want to avoid. One of the best ways to dodge some of the outcomes we don’t want is to start taking care of Future You. Don’t turn away from what Future You looks like – silver hair (or bald head) and all. Take a bold look into your future and start planning for your older, badass self.   #Badass #Future You #DarkFate