After the first week of the year, you might have wanted to cancel your 7-day trial subscription to 2021.

But onward we went: election, insurrection, inauguration, impeachment. It shows that the Universe has a wicked sense of humor when we were closing out an impeachment hearing over President’s Day weekend. I’m going to try to address how markets reacted – or didn’t – to all of these events, and what may be helpful to think about with regard to your own portfolio.

As we closed the first week of 2021, and the first week of trading in the stock market, we watched Georgia’s run-off elections for the U.S. Senate. Then we watched an angry mob take over the U.S Capitol building, sending legislators running for cover, something they had been briefed on in the event of a terrorist attack. Rioters destroyed property, ransacked offices, attacked police and the media, defecated in the halls of Congress. Five people died. And markets closed the week up.

Then we watched Congress go back to work, amid debris from the attack on the Capitol, and certify the 2020 Presidential election. Two weeks later we watched President Biden’s Inauguration. Only a little over half the country was on board with the new Administration, and the stock market closed up that week.

Finally, on President’s Day weekend, the second impeachment hearing of the 45th President of the United States ended, finding the former president didn’t incite the insurrection that started off the year. Guess what the stock market did?

The S&P 500 closed out the second week of February up over 6% from the beginning of the year.

ELECTIONS AND INSURRECTION: MARKETS REACT
Markets did not have much of a reaction to what was a historic insurrection. Two things make up the level of stock market pricing: fundamentals and expectations about the future. Fundamentals are the basic functioning of companies: the level of sales, of operating expenses, of competition domestically and overseas. Stock market expectations are exactly that: the collective thoughts and feelings about what the future might hold for those same sales, expenses and competition.

Despite events of the first two weeks of the year, the market said “we think you’re still going to order online, go to work on Monday, and find toilet paper in stores.” Despite an insurrection, economic life would go on. So that might explain markets, which didn’t negatively react to an event it could shrug off as a one-day thing that didn’t dent economic life. But what about the mayhem? Does it matter?

THE SHORT ANSWER: YES, IT MATTERS
If we just looked at the stock market, we could say none of it matters. But your financial security depends on institutions, financial and otherwise, that are under siege. And that matters.

THE LONGER ANSWER
If you’ve traveled widely, you’ve probably seen how countries and regions in which institutions are broken struggle with growth, corruption, poverty. In these “failed states” you won’t be able to trust that the money that you send from Point A to Point B will get there, or that your property (and possibly person) won’t be confiscated, by the government or other factions. You can’t rely on institutions as intermediaries in conducting business. Others no longer trust you in transactions. And without that trust, the flow of capital (cash/money/currency) the lifeblood of the economy, stops.

As much as we all complain about government and everything it might be doing wrong, we’d be unable to function without it, in our neighborhoods and on the world stage. Our institutions ensure workable roads, sanitary restaurants, food safety. Accurate reporting by companies on their profits, assurance that our wealth, now largely tallied electronically, is where we put it, that our property will be protected. Change our institutions, make them better, I’m all for that. But overthrow them in an attempted coup?

Had the terrorists achieved some of their goals, like violence against targeted legislators, markets would have reacted differently. What was surprising to me was that the Insurrection of 2021 was a warning shot over our bow, and we’ve mostly just kept sailing along.

And where is our boat now?

THE STOCK MARKET – THE LAST TWELVE MONTHS
The stock market over the last year was dominated by two main events: (1) the onset of the coronavirus, which here in the U.S. resulted in a 35% drop in March over stock market levels the month before, and (2) the announcement in November of success in development of an effective vaccine to combat the virus. Despite other difficult events during the year, including protests stemming from the killings of Breonna Taylor in March and George Floyd in May and through the Kenosha unrest following the shooting by police of Jacob Blake, the overall stock market was relatively unaffected after the initial hit last March. 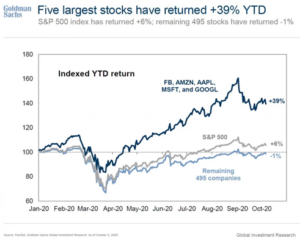 Together, these five stocks make up over 21% of the index. Despite there being over 500 other companies in the index, only a handful – known as the FAAMG stocks –did the heavy lifting throughout the year. By the end of October 2020, FAAMG stock growth was 39 percent for the year, versus 6 percent growth of all the other 495 stocks combined.

This situation raises one of the risks of indices: An index like the S&P 500 holds stocks based on their market capitalization (number of shares outstanding x stock price), giving a larger weight in the index to the stocks with the highest share prices. To track the index, you end up buying more of the companies with the higher stock price – the opposite of a “buy-low-sell-high” strategy.

If instead we had an S&P 500 Index that equally weights each company in the index, growth would look like this: 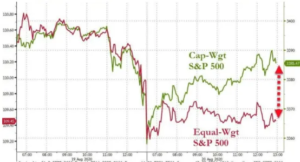 Strong demand for products and services of the FAAMG companies, coupled with their stock buy-backs (thank you, 2017 tax reform), have driven up the prices of these stocks.

THE ROARING TWENTIES: 1920’s or 2020’s?
The parallels between the decade we’ve just begun and the Roaring 20s of a hundred years ago bears eerie similarities: a pandemic, a market crash, vast economic inequality in the developed world. The comparison of the former president’s role in the January attack on the Capitol and the Beer Hall Putsch in 1923, when Adolf Hitler led an attack on the city of Munich as part of a larger plan to overthrow the Weimar Republic. We remember the 1920’s as a time of flappers and Prohibition, but it was also the time of the Tulsa Race Massacre and the beginning of mass incarceration of people of color.  It was a time of great prosperity, but prosperity concentrated in a few hands.

A populist narrative about overthrowing the elites directly appealed to the groups we saw storm the Capitol: Predominantly White, male, and wanting to dominate the story again. The need to dominate is a central tenet of the former president, but he is not alone: on Wall Street, in Silicon Valley, the “bro culture,” in market capitalism, all require hierarchy, and submission.

We can reject all of these permutations of domination – the racism, misogyny, homophobia, anti-Semitism, Islamaphobia – because it’s the right thing to do, and because restricting full economic participation for some groups costs all of us.  The harder part for all of us will be stepping into the future – what our lives, economy and world will looks like post-pandemic.

(Spoiler: That future is already here, and also part of the pushback as noted above.)

LIVING UP TO OUR POTENTIAL
The only thing scarier to most people than anything they have experienced in the past, is the unknown of the future. Until the pain of current circumstances becomes too much to bear, we will stay in very bad, harmful conditions. Even at that point, we don’t always have an idea about how to make a change.

This stuck-ness coupled with valuing domination, is what I believe is behind events going on in Washington, D.C. and what I believe we will see in the months to come. How we move the nation forward matters for many reasons, including for your finances. Our role as leader of the Free World, as the world’s greatest economic power, and from these, our ability to make the rules of the game, is at risk. The world’s view of the US matters, and the first few months of 2021 have reinforced a world view of the US as an “unpredictable and violent country.”  Is that who others would want in charge?

A UNIFYING GOAL
A case in point is our biggest global competitor, China. China recently released its 15-year plan for economic growth, while the U.S. cannot plan 15 months out. China’s plan for autonomous technological development, greater urbanization, more widely distributed economic benefits, and a greener footprint echoes some of the policies promoted by progressives in the U.S. No question, these policies would be easier to implement in a top-down, one-party centralized economy like China’s. No question, this focus is less due to humanitarian concerns than due to the zeal for long-term growth and global domination.

Before we can dismiss China’s plan as an ambitious one on paper, China’s is the only economy that posted growth in 2020. Its 2.3% growth in 2020 over the previous year is its slowest annual growth since 1976 – but still the only growth in a global economy continuing to struggle through the Coronavirus pandemic. China’s management of the virus with draconian lockdowns, coupled with infrastructure spending and economic support to the populace to stimulate spending, has buoyed its economy through 2020.

There is more to the story that just this, including complaints of an uneven recovery, and the fallback to dirtier industries to jumpstart growth. And China is not known for full disclosure; it’s possible they invented fake news.

I’m not arguing for central planning or the end to capitalism. What I am looking for is a goal all Americans can get behind to get through this pandemic, deal with the reckoning on social justice issues, and restore full economic participation for all. In other words: Let’s ignite healthy competition, to grow bigger and faster as a nation, fostered by stakeholder capitalism (corporate enterprise oriented towards the interests of customers, employees, and the community as well as investors).  This future – and continued growth in your portfolios –  depends on fostering the evolution of our institutions to embrace the future, not retreat to some earlier time.

There are monumental changes coming to institutions worldwide, and if we don’t adapt, the world will pass us by.  Blockchain technology, a Digital Dollar, how to maintain a reserve currency, and how to retain our privacy in a world intent on surveillance — these are some of the things we need to be sorting out.

The good news is that there are signs our institutions (at least some of them) are evolving to meet the challenge: One example is the Federal Reserve.  Last summer the Boston Fed started work with a group at MIT on a US-backed digital currency, and today Fed Chair Jerome Powell announced ramping up the discussions on a US Central Bank Digital Currency (CBDC), or Digital Dollar.  Digital currency is new – scary – risky – and likely the wave of the future to make financial transactions faster, more secure, and banking more available to all.  We need to be leaning in to these new things, not backing away.

We have a little more than seven months left in 2020 and another eight years for this century’s “Roaring Twenties” to play out…Stay tuned.

Read more here on The Rise of Central Bank Digital Currencies thanks to the Atlantic Council and on the last century’s Roaring Twenties, courtesy of Smithsonian Magazine.