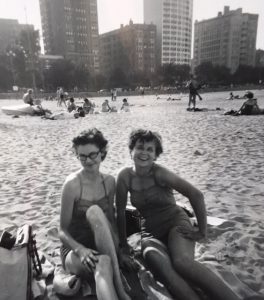 My mother was a strong and resilient woman, creative and resourceful, quick to help and even quicker to laugh. I adored her.  People often commented that she’d had a hard life, and she always countered that it was full of interesting experiences. I loved the stories she told about her life, but I also wished she’d had it a little easier.

My mother came to the US in 1952 at sixteen. She spoke five languages, none of which was English. Assimilation was high on her list and she quickly absorbed all that was American: Saturday night dances, movies & television, Elvis Presley.

After secretarial school, she lived with (and paid rent to) her parents while she started work at a bank. She met my father and they married in the early 1960s. They then promptly loaded up everything they had into a Ford Galaxy and headed west, settling in the Southern California suburbs. My father worked part-time and started school on the GI bill. I was born two years later, and my brother two years after that.

My mom had loved her job at the bank, as one of three assistants to the bank president. She loved living in a big city. But as a single woman in the 1950s and early 1960s, her life was limited. It was a challenge for a young woman to live on her own, an even a greater challenge to stay single. Once married and without any family nearby in those early years in California, she was on her own to figure out how to run her house and take care of two small children.

Once my brother and I were in school, she went looking for a job. She found one as a part-time bookkeeper for a local dairy. That job provided much-needed additional income to the household, but also much-needed social connection for my mother, and at least one trip for us to the dairy farm itself, complete with fragrant cow pastures and a dog named Fresca.

By now, it was the late 1960s. We’d sent men to the moon, but women could still get fired for getting pregnant, contraception was not widely available, and banks could refuse to extend credit to women. Betty Friedan exposed “the thing that has no name” in 1963, but my mother already knew what it was: it was the albatross of economic dependence, of limiting cultural norms, and the prevailing expectations about mothers and motherhood.

How much easier have we made mothers’ lives today?

Pay equity: Becoming a mother should not mean you are worth any less as an employee. Neither parenthood nor marital status should determine pay, yet married men are generally paid more than single men (and most women, married or single).

Paid family leave: We make accommodation for employees to address and recover from other medical events; time to properly heal and bond makes mother and baby healthier and most women cannot afford to take unpaid leave to do this. (Note this is family leave, not just maternity or parental leave; women are more likely to take a second round of leave, when they assume caregiving for elderly parents, impacting their earning potential a second time.)

Access to quality child care: Becoming a mother shouldn’t mean you have to choose between your economic independence and parenthood. Fathers do not.

For those who say we can’t afford to move in this direction, the question really is: Can we afford NOT to? We are increasingly competing with countries that do offer these types of support. Consider these tidbits:

Universal basic health coverage could be paid for from the increased taxes owed by corporations on the higher taxable income they would have once they no longer have the tax deduction for health insurance expenses for workers;
Quality child care costs can be subsidized by the taxes that will be owed on the wages of these new working parents; research has shown businesses would benefit from reduced absenteeism and greater employee retention;
An extra bonus: more workers in the paid workforce mean additional payroll taxes to support Social Security and Medicare.

Being a mother can be a priceless experience. But it shouldn’t be a Hunger Games competition. It shouldn’t rob a woman of an equal wage for equal work, or advancement if she doesn’t have funds to pay privately for quality child care.

All of the ideas on my list would have gone a long way to help my mom. She did a great job despite these hurdles, but while we celebrate mothers today, isn’t it time we make it a little easier to be a mom the other 364 days a year?