Now that your 2016 tax return is behind you, you might be thinking about how tax reform changes expected under the Trump Administration might affect you. We are expecting a big announcement tomorrow, but despite some advance hype of “massive” changes, we’re likely to get only minimal details. The tax code is 4,029 pages and covers a multitude of taxes and entities. Tax reform, like Repeal and Replace, is going to take longer than originally planned.

The Big Three Goals of current tax reform proposals are:

In general, Republican proposals strive to broaden the tax base and lower tax rates. Under the banner of freedom and personal responsibility, these proposals support the idea that government should be as small as possible, providing minimal benefits to individuals, but counter that with lower tax rates, meaning more after-tax dollars in pocket, with which people are free to do what they want.

What are the things to watch for tomorrow? Here’s what I’ll be watching for:

1. Corporate tax rate: Republicans originally wanted a 20-25% top rate, which even they felt was unrealistic. Expect Trump to hold out for the 15% corporate rate he campaigned on.

The argument for a lower corporate tax rate is one of global competitiveness. The Tax Foundation reported that the US ranks 32 of 43 countries in the OECD in terms of international competitiveness. Note that the Tax Foundation is the oldest non-profit think tank in the country, described as an “independent tax policy research center” but it is also noted for a conservative, business-friendly bias.

The top US corporate tax rate is 35%. But who really pays this? The US Government Accountability Office (GAO) issued a report in March 2016 that reviewed US corporate taxes over a five-year period. “From 2008-2012, profitable large US corporations paid, on average, US federal income taxes amounting to about 14% of the pretax net income that they reported in their financial statements. When foreign and state and local income taxes are included, the average effective tax rate across all of those years increases to just over 22%.”

One of my sources for tax policy research is the Tax Policy Center (TPC), a nonpartisan joint venture between the Urban Institute and the Brookings Institution. From TPC’s perspective, a 15% corporate tax rate would make the US one of the lowest corporate tax regimes – until other countries cut their own rates, as they did after the Tax Reform Act of 1986. It would also create a ginormous loophole for high-income individuals. Under the Trump proposal, the 15% rate would apply to partnerships and sole proprietorships, which would create a huge path for tax avoidance by sheltering wages through such an entity. If the new rules let pass-through entities, such as sole proprietors and LLCs (like this firm) be taxed at the lower corporate tax rate, then that benefits me (and dentists).

Let’s be clear about how this works: it’s not like there is one bucket for corporate tax receipts, and a separate one for individual tax payments, and yet another for payroll taxes. All tax receipts go into the same bucket, and go right out again to pay our collective expenses. Those countries with lower corporate tax rates also have much higher personal tax rates. (The plan in the US is to cut those too – at least at the very top levels. You can guess where this is headed.)

The one bright idea in corporate tax reform proposals is to tie corporate tax rate reform to reform of individual tax rates, potentially aligning rates and eliminating this type of income-shifting loophole.

2. Fewer tax brackets for individuals: The idea is to simplify the tax system. The following chart shows how your tax bracket might change under the proposed simplification. 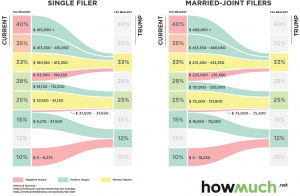 By the way, this doesn’t come without a cost. The deficit is expected to increase by $6 trillion in 10 years. That’s more than a 25% increase. Your kids and grandkids get to figure out how to pay for that.

Ultimately what you care about is what you have in your pocket, as well as what things you have to pay for (health care, city services, college, retirement, etc). While marginal tax brackets are expected to change, if some deductions and exemptions are eliminated as expected, you could end up paying more in taxes. Fortune magazine took a look at the impact of expected changes on take-home pay, and this is the result:

If you’re in the Top 1% of earners, this works for you.

That said, Trump is not the only President to use tax reform to rectify political slights. We have the current rule on the non-deductibility of donations to not-for-profit organizations with a political agenda because President Lyndon Johnson was miffed over a preacher literally using his pulpit to bully Johnson. Trump has suggested repealing the Johnson Amendment, which essentially shut down lobbying activity by 501c3 organizations.

But if you don’t have itemized deductions of at least $30,000 for a married couple (or $15,000 for a single filer), it might not make that much difference to you, and might simplify your tax return.

Trump campaigned on capping all itemized deductions at $100,000 for single people and $200,000 for couples. You might not care about this one either, if you’re not making seven figures. But a lot of support to not-for-profits comes from higher earners. A taxpayer making over $1 million paid an average of $260,000 on state and local taxes according to the TPC. At this point, this taxpayer’s itemized deductions would be capped, eliminating the tax incentive for charitable giving by high earners.

One of the arguments made by those favoring smaller government is that people should have the choice of how their money is spent, and if they want to give to social services and other philanthropic causes, they can give to charity directly. Congress created the charitable deduction 100 years ago this year, to incent Americans to support their communities. With smaller government and a capped or eliminated charitable deduction, the landscape of American society will fundamentally change.  If you are in the camp that believes an American spirit of generosity is in part responsible for the success of capitalism (as I am), things won’t be changing for the better. The “compassionate conservatives” in the Republican Party won’t be happy with the reduction in tax incentives for charitable giving either, as it would affect donations to religious organizations.

7. Limits on donor-advised fund deductions: It’s unlikely we’ll hear anything tomorrow on this detail of the tax code. There are already some limits based on income for large charitable contributions, either directly to an organization or to a donor-advised fund (DAF). A DAF allows a taxpayer to “bunch” deductions for future charitable contributions into a single tax year. I recommend DAF contributions to charitably-inclined clients when they have a windfall, to off-set some of the tax they would otherwise pay in that year. Proposals here have included a time limit on the pay-out of DAF money through grants. Under current law, there is no limit on how quickly you need to make donations from a DAF; some proposals are suggesting funds be distributed to charities in 5 years.

Simpler is not always better. In my view we have the wacky tax code we have due to the same strong special interests we have always had, and because our economic world has grown more complicated. If you think about the tax code as a tool to incent certain behavior, as an example, you get to deduct your mortgage interest and property taxes because as a society we think it’s better for wealth building and maintaining capital stock for individuals to own their own homes. We have other tax rules to rectify imbalances, such as the Alternative Minimum Tax (AMT), which was created because in 1962 it was discovered that a bunch of millionaires were paying no tax, and that seemed unfair. That it was not inflation-adjusted and had unintended consequences years later doesn’t mean it was a bad idea, it means it needed to evolve as the economic landscape did.

For a quick overview of the three main proposals and detail on some of the main changes up for consideration that you may hear about tomorrow, check out http://www.taxpolicycenter.org/feature/preparing-2017-tax-debate

Remember that Trump views himself as a disrupter and a master negotiator, and as such, he’s not likely to start with a centrist proposal meant to bring everyone into the fold. Once we do have a detailed bill to consider, the legislative process begins. That means lots of hearings, followed by changes, more review and comments before the House then Senate vote. But Democrats in Congress are not aligned, and Republicans  may attempt to push through a tax bill with only Republican votes, though they may not have enough.

Alternatively, Republicans can use the Budget Reconciliation process to overcome this legislative hurdle. There are many rules that need to be followed, but it’s possible we’ll get tax reform this way. We got the Affordable Care Act this way under Obama and the 2001 tax cuts under Bush.

To date, there has generally been strong support for tax incentives for retirement savings, home ownership, and some charitable giving. Under the proposals being floated thus far, these tax-preferenced items are expected to have less value in the future.