This weekend, the Apollo 11 moon landing celebrated its 50th anniversary. The event was just on the edge of my personal history: I was five (and a half – back when counting halves was important). The experience of Apollo 11, and the missions that came after, shaped me and the way I see the world.

I’ve been a space geek since I can remember. A highlight of my life was a trip to the Kennedy Space Center (KSC) in the late 1990’s, an outing during a business conference. Apollo 11 was one of many missions in the Apollo program, which followed the Gemini program and the Mercury program before that. The tour at KSC recreated the last two minutes of the Apollo 8 mission launch. Apollo 8 flew the first humans into the Moon’s orbit, and gave us the famous photograph, ‘Earthrise.’ 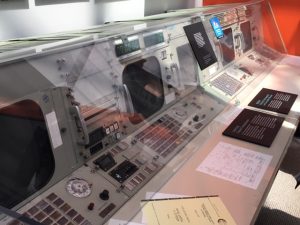 After a history lesson about how many things had gone wrong – seriously wrong – just prior to that mission, we visitors looked into a room with the actual consoles from that Mission Control room, the jackets and windbreakers with the logos of companies now gone, or merged into others, hanging on the backs of chairs: McDonnell Douglas, Northrup Grumman, North American Aviation.

It was 1998 and we were all thinking about Y2K and what could go wrong. At the time I was at Starbucks and responsible for the company’s banking relationships; one fear was that the electronic ledger that banks used would go kablooey as we flipped into the new century and money would disappear off the books (it did not).

The Apollo 8 launch required more than 400 different systems to work together, systems built by many different companies, each responsible for a piece of the whole. We counted down to zero – Ignition – and the room shook and filled with light and sound. Apollo 8 had launched! Then we walked out into the hangar, out under a Saturn V rocket. All 363 feet, 3,270 tons of it. We sat down for dinner, of which I have no memory. Everything stopped with that rocket.

The technology of the time: The telephone. The typewriter. The transistor.
Not yet invented: The personal computer. The cellphone. The internet. Pong.

Thirteen missions using a Saturn V rocket were flown, all of them successful. They completed these missions and never carried a weapon into space. “We came in peace for all Mankind.”

With a backdrop of great civil unrest and international turmoil, we found the money and the focus to send men to the moon. There were detractors; there were plenty of domestic issues that needed attention, too. The same can be said today. 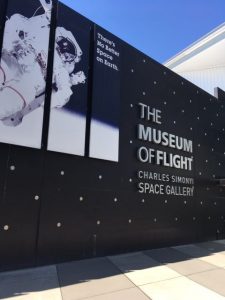 Destination Moon
In homage to the anniversary of the Apollo 11 landing, I went to the Museum of Flight outside of Seattle and stood inches from the Command Module, Columbia, that splash-landed in the Pacific, bringing Michael Collins, Buzz Aldrin, and Neil Armstrong safely back to Earth.

There were a lot of things that had to happen before Columbia came back to us. Tests, mistakes, massive, tragic failures. Many of the Apollo missions you don’t hear much about were testing equipment and different stages of what would become the trip to land on the Moon.

Making mistakes, course correcting along the way
We talk a lot about “course corrections” in planning and investment management, too. We offer questionnaires and exercises to test your risk tolerance, to establish benchmarks so we know whether we’re meeting your goals, and make many small and sometimes big changes to plans as we go and as the environment changes around us.

Apollo 7 tested the Command Module in Earth orbit and Apollo 8 tested it in lunar orbit. Apollo 9 evaluated the Lunar Module in Earth orbit, then Apollo 10 was the “dress rehearsal,” testing all of the stages of a mission to the Moon, up to landing on it. All this work was to prepare for Apollo 11.

The point is that Big Goals are accomplished in many, many small steps. For those of you thinking you “should” know something, or “should” be at a certain point in life financially, know that we all learn as we go. It might have been a little easier for the rocket scientists at NASA to set and keep their goals, given that they had the laws of physics to work with; there are no such rules that govern the stock market. You make a plan, you test the plan, get help as you need it, and course-correct along the way.

Taking a minute to reflect on and take in each success along the way
After landing on the Moon and before stepping outside the Lunar Module (LM), Buzz Aldrin radioed to Earth: “This is the LM pilot. I’d like to take this opportunity to ask every person listening in, whoever and wherever they may be, to pause for a moment and contemplate the events of the past few hours and to give thanks in his or her own way.”

If you listen to the radio transmissions of the whole mission, you hear the milestones; even under the strict protocol between Mission Control and the flight crew, you hear the recognition of each achievement, each phase of the plan as it’s executed. And on occasion, there is a call out just to honor reaching a goal.

It’s easy to get caught up in checking things off your list, then moving right on to the next thing. But there will always be a “next thing.” Satisfaction and joy are found in between. During each Mission, there was always the next thing to worry about, but as stressed and weary as they were, with this huge responsibility, they still took a minute and just allowed themselves to feel the success. Allow yourself your successes, too.

Part of Something Bigger
Every culture has a creation story. Something started this whole thing, and that something is bigger than you or I. Whether you believe a faith-based origin story or not, the result of all of us being here is deserving of respect. And awe.

Most of the research on happiness boils down to having a sense of purpose and belonging. We each need to feel our individual efforts have value and meaning, and also that we are connected to something bigger than ourselves. This perspective can run afoul of the American insistence on individualism, on boot-strapping, on doing it yourself. In the words of Irv Grousbeck, co-founder of the Center for Entrepreneurial Studies at the Graduate School of Business at Stanford, “We have all drunk from wells we have not dug.”

Astronauts in the Apollo program had various personal beliefs about God and how we got here, and appreciated the collective work that was required for what they were doing.  At each step, they called out how this was in every way a team effort. Even if you’re not a space geek like me, it is amazing to contemplate a time when everyone— virtually everyone on Earth—was pointed in the same direction. There was a profound sense of responsibility for what we were doing, and what it would mean for people other than ourselves. Six hundred million people around the world watched men land on the Moon. We knew we were part of something bigger.

There was a continuous refrain throughout the program and its missions that one person doesn’t do this alone. We set aside major differences: despite the Space Race with the Soviets, the astronauts left on the Moon two memorial medals of Soviet cosmonauts Vladimir Komarov and Yuri Gagarin, space pioneers, along with messages from world leaders. They also left a patch from the Apollo 1 mission, which took the lives of three astronauts in a launch pad fire, but from which we learned vital lessons that later allowed three other astronauts to reach the Moon. On the Apollo 11 patch, the flight crew opted for inclusivity over individual recognition and decided not to include their names, so it would “be representative of everyone who had worked toward a lunar landing.”

It’s a rare client who doesn’t have an underlying goal to feel that what they’ve done during their life has been meaningful, and to want to be connected to others.  For me, meaningful work is my reason for being.   It is my preeminent goal, and it is a privilege to be a part of helping someone else live up to their goals for meaning and connection.

No One is Perfect
As a perfectionist myself, I realize how this limits me, but it’s hard to let go when you feel the stakes are high.  To that, I suggest for both of you and I that we let it go: No one is perfect.  But there are work-arounds! 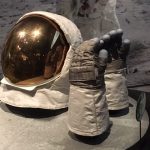 Perhaps the most surprising part of the exhibit for me was not to see Buzz Aldrin’s helmet and gloves from his Apollo 11 moonwalk (which were awesome!), but to see the notes he had written on his glove.  The display included a magnifying glass so you could read the to-do list reminding him of his tasks during the moonwalk.  Note to Self: get a photograph of a boot print on the Moon! Check!

It’s not just you: Even a rocket scientist needs a crib sheet… 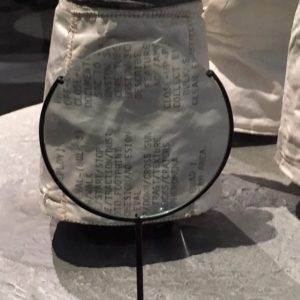 Progress We Have Made
One of the things both inspiring and vexing about a look back at the Apollo missions is that there were women and people of color involved in various aspects of the Program, yet many of them we are only hearing about now, fifty years later:
• Katherine Goble Johnson was one of the “computers” at NASA behind John Glenn’s Mercury mission, for which she received the Medal of Freedom, our nation’s highest civilian honor, in 2015 (and a film credit in Hidden Figures in 2016);
• Frances “Poppy” Northcutt was an engineer, the only woman in Mission Control during Apollo 8, and remained a NASA contractor until the early 1970s when she pivoted to become a lawyer; she now describes herself as a “one time rocket scientist, sometime lawyer, full time feminist”;
• JoAnn Morgan was an instrumentation controller for Apollo 11 and the only woman in the firing room. She became the first woman to serve as a senior executive at the Kennedy Space Center.

We have had a history not only of discriminating against women and people of color, but also of leaving them out of the sanitized version of history we record. Were it not for the then-recent invention of television prior to Apollo, we might never have known that there was at least one woman in Mission Control and lots of others who helped one man take a “giant leap for mankind.” After seeing her on TV, little girls from around the world sent Northcutt masses of fan letters saying things like “I didn’t know women could work in mission control.”

These women and others were pioneers of space and also here at home. One of the best parts of their stories was how they helped the women coming after them. As role models, but also actively, by serving as advocates in promoting other women for more senior positions and pushing for policy reforms at their companies, such as parental leave. We may be at a point in our history again where women recognize the power of coming together and helping each other.

Fifty years after Apollo, we have made progress. The big lessons for me are those I note above, along with the message that it’s going to take all of us coming together to push for progress here on Earth, whether that is greater diversity in the workplace, pay equity, leave policies for caregiving and retraining, or new endeavors in space. If we can put a man on the Moon…

For more on the ladies of NASA’s early days, you can read more here:
Poppy Northcutt Remembers Apollo 11 (Space.com)
The Women Who Helped Put Men on the Moon (Los Angeles Times)
Five Women Who Made the Moon Landing Possible (The New York Times (tiered subscription)